The Great Barrier Reef is immense, beautiful, diverse, and vibrant. The Reef supports thousands of unique marine animals and plants and our way of life.

Climate change is the biggest threat to the Reef, and is making marine heatwaves hotter, longer and more frequent.

Coral reefs are not just beautiful, brightly coloured backgrounds for serene snorkelling experiences — they are vital to life on earth. At least a quarter of the world’s marine life needs coral reefs for some part of their life cycle.

Despite their beauty and importance coral reefs around the world are disappearing fast. Water pollution, overfishing and coastal development are taking their toll on coral reefs at the local level, while carbon pollution threatens reefs worldwide and remains their biggest threat.

What is coral bleaching?

When the Reef’s waters stay too hot for too long, the coral becomes stressed and expel the colourful marine algae living inside their tissues, called zooxanthellae. Zooxanthellae provide the coral with food and energy from the sun (due to a process called photosynthesis), allowing them to grow and reproduce.

When corals get stressed, from things such as heat or pollution, they react by expelling this algae, leaving a white skeleton behind. This is known as ‘coral bleaching’. Some corals can feed themselves, but without the zooxanthellae, most corals starve. A healthy Reef can recover from coral bleaching, but it needs time and the right conditions. Coral reefs take around a decade to fully recover. 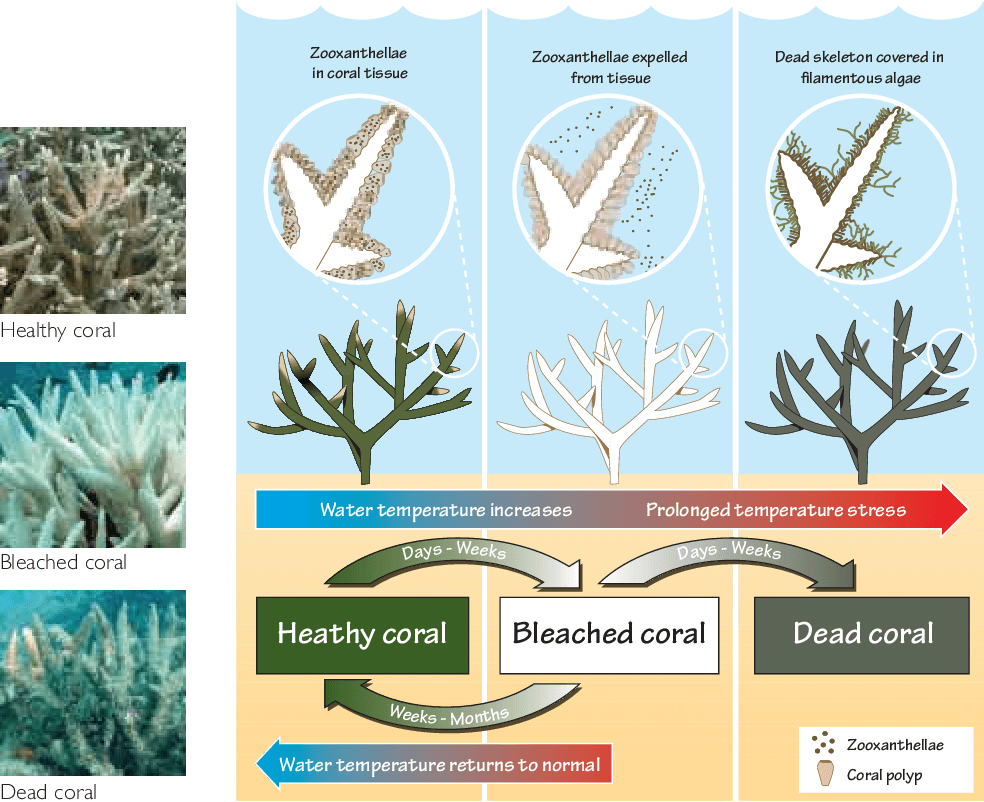 Can coral recover from bleaching?

In some instances corals can recover from bleaching. If conditions return to normal, and stay that way, corals can regain their algae, return to their bright colours and survive. However prolonged warmer temperatures and other stressors, like poor water quality, can leave the living coral in a weakened state. It can struggle to regrow, reproduce and resist disease – so is very vulnerable to coral diseases and mortality.

It can take decades for coral reefs to fully recover from a bleaching event, so it is vital that these events do not occur frequently.  If we continue burning fossil fuels at our current rate then severe bleaching events are likely to hit reefs annually by the middle of the century. This would be devastating for coral reefs as they would have no chance to recover.

We need to urgently reduce our carbon pollution and limit the global temperature increase to 1.5 degrees, or the world’s reefs will face a bleak future.

What is driving marine heatwaves?

The mining and burning of fossil fuels releases carbon pollution into the air, which is warming our oceans and causing more frequent and intense marine heatwaves. The ocean absorbs excess heat and this creates above average sea surface temperatures. Since 1900 the ocean’s temperature has warmed by 1°C. This may seem insignificant, however corals are very sensitive to temperature changes. Corals start to get stressed if temperatures increase by 1°C or more.

Why are marine heatwaves bad for the Reef?

Marine heat waves are dangerous for coral reefs because the hotter than average ocean temperatures stress corals and can lead to mass coral bleaching events. Marine heatwaves can last weeks, months or even years. If ocean temperatures remain high for eight weeks or longer, the coral cannot recover and begin to die. A before and after photo of coral bleaching on Lizard Island, Great Barrier Reef, Queensland. Photo credit: The Ocean Agency.

What is the scientific outlook?

Scientists tell us that once we hit 1.5C of warming coral reefs will struggle to survive. If we don’t keep 1.5C of global warming within reach this decade, the harsh reality is we will see more mass bleaching events and the rapid decline of our global icon.

In just seven years, our Reef has suffered four severe mass coral bleaching events, faster and more severe than scientists predicted. If we don’t act to halt this pollution, we risk the future of our precious Reef.

We can solve the coral bleaching crisis – if we choose to

We have the solutions. With real leadership we can stop carbon pollution and allow our coral reefs to recover and rebuild. But to do this, we must quit dirty coal, and transition to renewable energy today. If we take climate leadership then our coral reefs, and the thousands of species that rely on them (which includes us), can rebuild and thrive for generations to come.

We must commit to:

Even a rise of just one degree celsius for only four weeks can trigger bleaching in a coral. If ocean temperatures stay high for eight weeks or longer, the coral cannot recover and begins to die.

How is our Great Barrier Reef affected?

If we don’t act to halt this pollution, we risk the future of our precious Reef.

2022 – For the fourth time since 2016, our Reef has been hit with a devastating mass coral bleaching event, and the first in a La Nina year, which is usually characterised by cooler, cloudier conditions. On the other side of the continent, the world famous Ningaloo Reef Marine Park also showed signs of bleaching. Image: 2022 Aerial Survey observations of coral bleaching throughout the Great Barrier Reef after the final heat wave from 12-23 March 2022.

2020 –  our Reef suffered a third mass coral bleaching event in just five years. This was the most widespread bleaching event, with reefs impacted from the top to the bottom of the Great Barrier Reef. Fortunately most of the prime Reef tourism destinations were spared in 2020 and surveys in the southern Great Barrier Reef indicate that a late cool weather change meant that many bleached corals were able to survive.

Over 2016 and 2017, our Reef suffered back-to-back bleaching, leaving half of the shallow water corals dead. Results from extensive aerial and underwater surveys showed that 29% of corals died from the 2016 event alone – with most perishing in the northern section, where waters are warmest. The bleaching event in 2017 reached further south from Port Douglas to Townsville. A further estimated 20% of corals died. To compound this, a category four cyclone, with wind speeds up to 263 km/h that violently ravaged the Whitsundays region – decimating coral reefs in its path.

The combined impact of the two severe bleaching events, Cyclone Debbie and current severe outbreaks of coral-eating Crown of Thorns starfish since early 2016 have significantly impacted our Great Barrier Reef.

Our oceans have no borders. This is a global crisis, but change starts here.

If we lose coral reefs we also lose a vast number of fish and other animals that rely on them. This will have terrible consequences right up the food chain impacting larger creatures, like dolphins and sharks that rely on reef fish for their diet.

Coral bleaching risks not just our oceans and wildlife, but the livelihood and food security of over half a billion people worldwide.

We do have the power to change the future for our Great Barrier Reef, and all our reefs.

Will you Fight For Our Reef?

Find out more about the Fight For Our Reef

Chip in to help us protect our Great Barrier Reef